Becky Kauten hosted her annual tour of the magnificent fen on the family farm this past (i.e., Labor Day) weekend. Over 50 wetland enthusiasts talked, laughed, and even jumped up and down (really!). We surely had fun. But, this wonderful wetland was very nearly destroyed…but it simply Would Not Die. 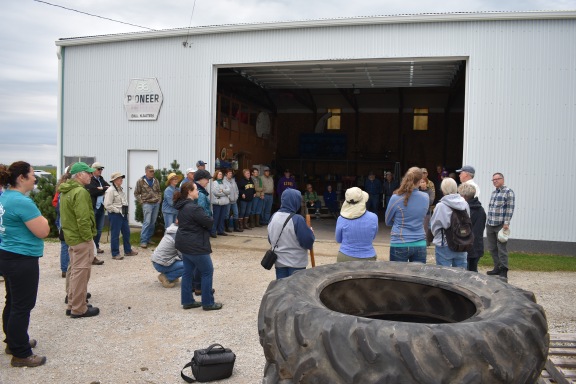 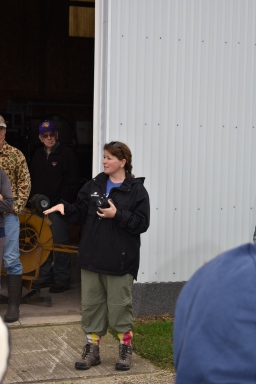 The site is in Fayette County, not far from the city of Fayette. Our group included locals such as shutterbugs or academics or Audubon members, but my wife & I drove three hours from Pella, and plenty of others came from all over. It was definitely worth it: there are almost no other fens in Iowa so large and in such good condition…this is one to see. And we could learn from the best–the State Ecologist himself (John Pearson, IA-DNR) led the tour. John showed us the rich Iowa farm soil outside the fen, black with organic matter and rich (some of the best topsoil in the world, as Iowans modestly mention). Yet that typical “mineral” topsoil is composed of less than 10% organic content; compare that with the fen surface, a 15-foot (5-meter) thick layer of undecomposed plants (peat) which is essentially 100% organic matter. Better still, the peat mat is spongy and saturated—very much like a giant sponge floating on groundwater. The peat even “quakes” as you walk (or jump) on it. 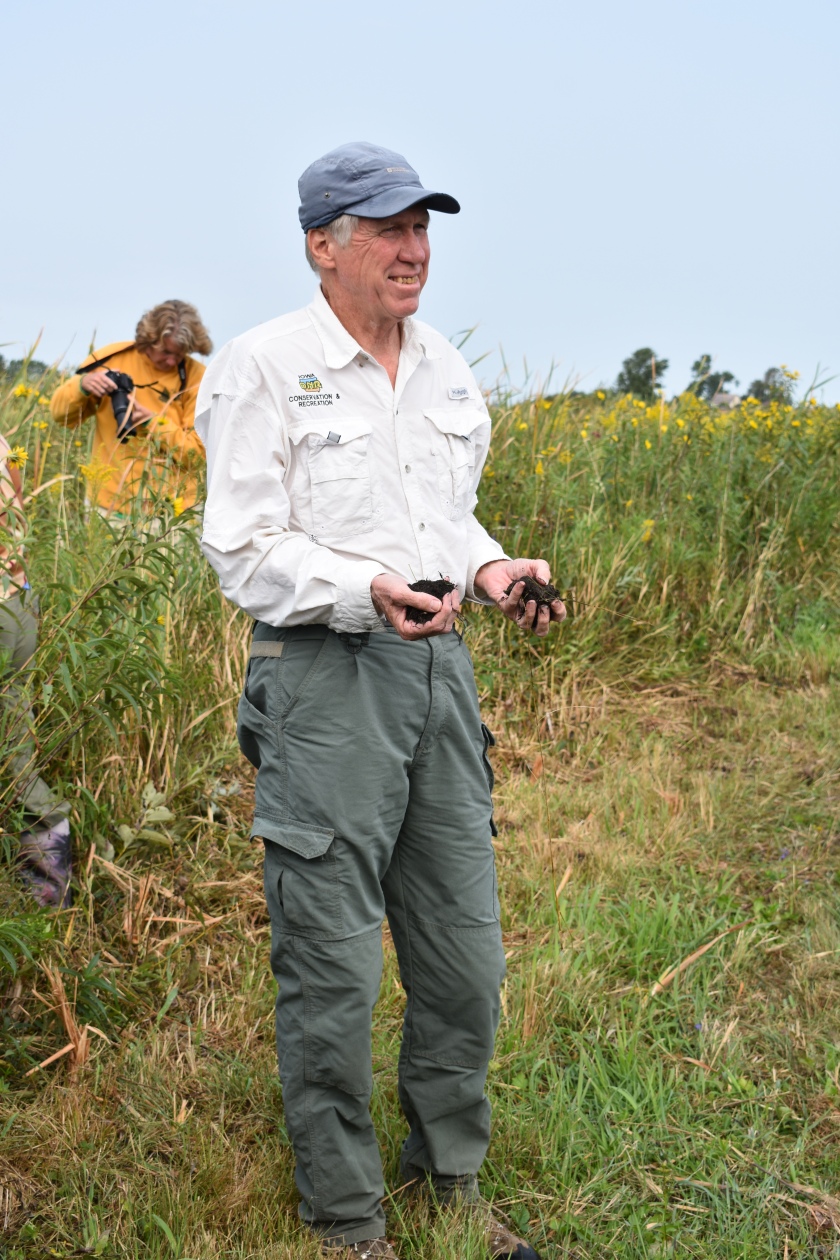 A fen builds peat very slowly, perhaps a millimeter a year (about the thickness of a dime). John did the math: 1000 mm in a meter, and 5 meters of peat = 5,000 years to accumulate this peat deposit. The plants growing here didn’t decompose when they died, like the plants growing in the surrounding prairie. Groundwater seeping up instead created unusual chemical conditions, and arrested the degradation process (you can read a bit more about fen hydrology and peat in the entry on Silver Lake Fen). We could see the habitat zones of groundwater discharge, nearby “salty” conditions where dissolved minerals concentrate, and a border zone beyond that where conditions become less soggy. Across these zones are slightly higher  “hummocks” and lower ruts (including a particularly hazardous hole left behind during an attempt to plumb and drain the fen).  It’s an unusual hydrology, likely to lead to confusion: it is always wet, but never covered with standing water. Hardly seems like a “wetland” if no standing water is observed. In fact, the whole of the fen is all raised up on a mound above nearby farm ground. Seems reasonable that with a little work, that extra water could be drained away, and the land put under the plow. This is Iowa, after all.

This fen was and is on private property, subject to the same financial realities as most of Iowa’s land—an agriculturally-productive landscape, indeed. The Kauten family farms the surrounding ground, and Mr. Bill Kauten tried for years to farm the fen, too. And why not? Plowing and herbicides can work miracles. But not here: the fen was just too wet. Despite trying to lay in drain tiles (perforated pipes) to remove the water, the site simply would’t drain. Groundwater seeps to the surface here at such a rate that ordinary agricultural drainage is insufficient to take it away. The fen simply would not die.

Mr. Kauten looked for an alternative. Enrolling the fen in the Conservation Reserve Program (CRP) seemed a reasonable approach. CRP provides funds to farmers who provide wildlife habitat in the otherwise agricultural landscape. Makes sense. The problem was, the program required evidence that the ground had previously been farmed, before it could be removed from farm production and put into conservation. So Bill dutifully tried to “establish a crop history,” by farming it, despite the seriously wet, peaty conditions—a losing battle. In the end, a different conservation incentive (REAP, a State program) was enlisted. And so it was finally protected. 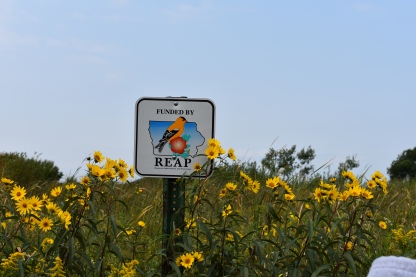 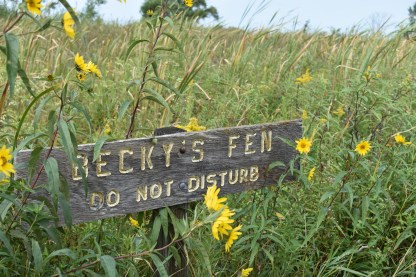 And now the fen is here, and we can wander among the plants. Cattails and sedges and various grass-like “graminoids” dominate the plant community composed mainly of perennials. We learned to identify Beak-Rush (not a “rush” of Juncus, rather Scleria).

Scattered throughout is a diversity of wildflowers. Of particular interest are Riddle’s Goldenrod with its recurved leaves and beautiful yellow-gold blossoms, Sage Willow with shiny silvery-white foliage, Tobacco Valerian, Ladies Tresses Orchid, several Gentians including Fringed and Bottle, and Brook (Kalm’s) Lobelia. But there are so many more: John mentioned a study by a Drake University researcher conducted throughout a growing season. Unlike this one-shot tour, that systematic survey conducted every two weeks yielded 200 species of plants! What a botanical treasure. 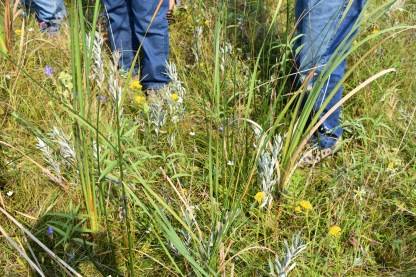 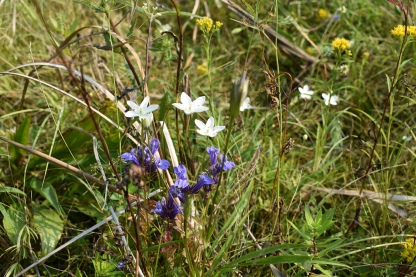 Let’s call this a big success. We enjoyed some beautiful plant diversity, learned about the unique hydrology and ecology of this place, and met some wonderful people who took time out of a holiday weekend to celebrate one of Iowa’s great wetlands.

What a special place, and a story with a happy ending: the fen is still very much alive! Let’s hope this special place is enjoyed by visitors for many years to come.

4 thoughts on “The Fen That Would Not Die.”