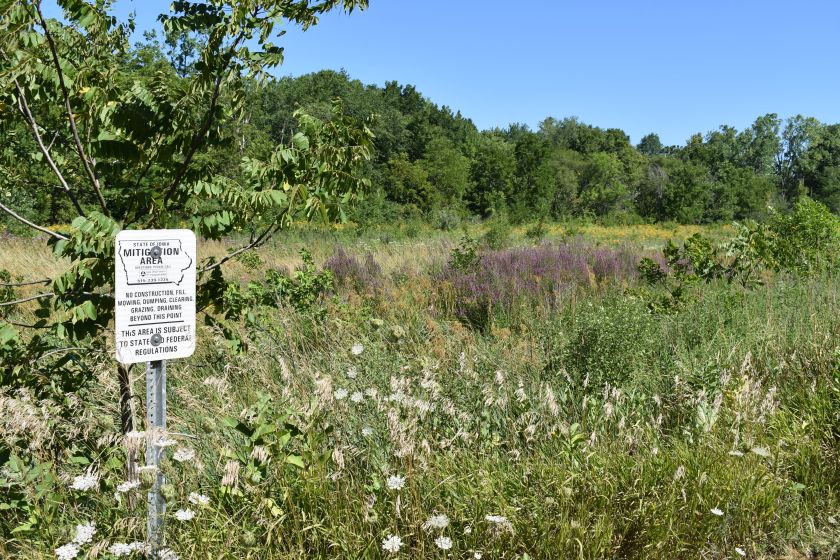 Weeds are a significant concern of land managers, but wetland weeds pose a particular challenge. It can be difficult to access the weed patch; use of machinery may not be possible given the soggy conditions; and spraying chemical herbicides may be prohibited due to concerns regarding water contamination (it IS a wetland, after all…). So, what to do? One strategy: bring in something to eat the weeds!

Here at Neff Wetlands near Fairfield in Jefferson County, we have a considerable population of the notorious, exotic wetland weed Purple Loosestrife (Lythrum salicaria). It’s presence is unsurprising for two reasons. First, the site is along a busy trail and near a stream; plenty of ways for weed seeds to arrive. Second, the site was recently disturbed—by being built! It is former agricultural land, converted to wetland. The wetland is a mitigation project, designated to replace wetlands lost during state highway work near Sigourney (Keokuk Co.). As with any disturbance to the land surface, the opportunity for weeds to appear, proliferate, and dominate is a concern (disturbance often favors weedy species). 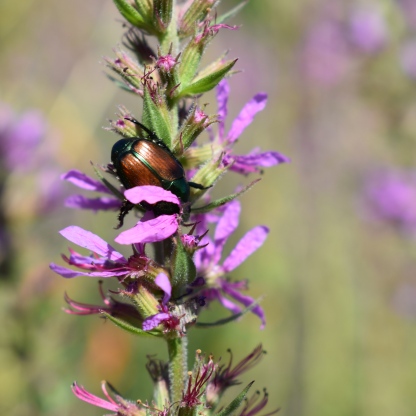 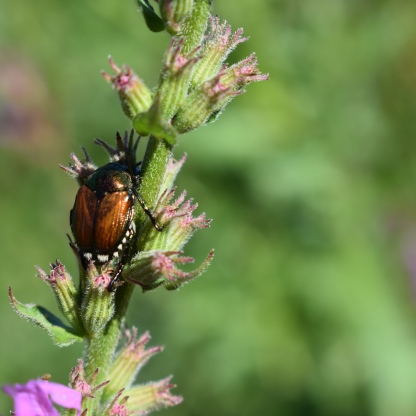 So, the weed arrived and took off…no surprise. But the plant now faces a natural enemy, a plant-eating beetle from the plant’s original European homeland: Galerucella calmariensis, one of several insects introduced for  biocontrol of this plant. I observed numerous insects at other sites, and they were quite active. These photos show characteristic holes (“windows”) in the Loosestrife leaves, possibly caused by Japanese beetles (Popillia japonica). I presume that over the coming weeks, insects will eat still more of the plants; they can successfully overwinter, and I expect they will continue to increase in numbers and increase damage to the plant over the years. Eventually, the plant might be eliminated from the site—I’ve seen the impressive results of such  insect attacks elsewhere in Iowa wetlands. Insect herbivory on Loosestrife is really significant.

I think of two important issues for Iowa wetlands. First, weeds are a real threat, and must be taken seriously. Any ecological disturbance creates an opening for opportunistic weedy species; wetland construction is just such a disturbance. So monitoring and prompt control is important. Second, biological control is a viable option in some cases. The Loosestrife beetle insects were intentionally introduced to North America in 1992 for biocontrol, and have indeed impacted the plant. Importantly, the insects have not attacked other plants; such host-specificity is paramount (who wants to be the one who releases an insect that later attacks, say, soybeans? Yikes!!). Biocontrol is a powerful weapon; used judiciously, it may be an important tool for wetland managers. If you visit Neff wetlands in the future, leave a comment here and tell us how the battle of Beetle vs Weed has played out. Which insects do you see? How much plant damage do they cause?

Having learned some lessons, let’s also enjoy this wetland. It’s located along an active trail network (lots of visitors while I was there), and it is a story of ecological healing. The former landowner, Mr. Dave Neff, told me during a phone conversation, about how years ago this was a field of row-crop agriculture (soybeans) but with signs of wetland life, including amphibians using the field. Considerable work to control weeds (such as Teasel) with fire was part of the restoration, and returning wetland hydrology to the site is obviously important. But multiple generations of the Neff family enjoyed this wetland, discovering animals under ice in winter, or tending bird nest boxes, or working to make this place ecologically sound. I hope to come back and watch the system develop. If you stop by, add a comment here and tell us how it goes!

5 thoughts on “Will the beetles control the weed…?”