In Chickasaw County, I visited the Stoltz Addition property operated by the County Conservation Board. As I saw at Cottonwood Pits in Monroe County, I found the remains of an old mine: water-filled pits now used by birds (and of course, hunters of birds). Here the mine was a sand-and-gravel operation, rather than coal as at Cottonwood Pits. The Stoltz Addition site is adjacent to, and in portions flooded by, the nearby Wapsipinicon River. I expect the sand and gravel were layered on the site in deposits by the river over many years. Today, waterfowl swim and dabble and dive and stir up froth in the pits. Pondering the old mine, I got to thinking about things permanent and things fleeting. 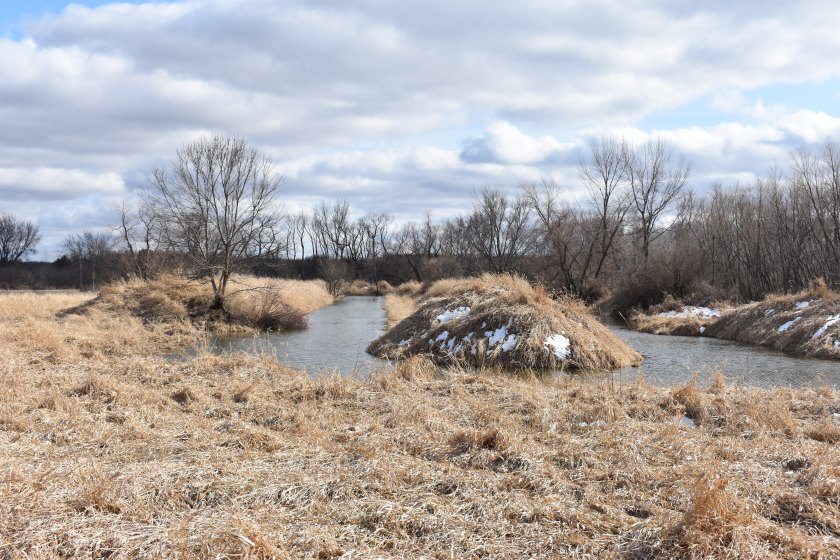 Upon entering from the parking area, the long rows of pits and piled overburden are visible. Aerial photos from the 1980-2000 period showed extensive mining around the site, some of which was subsequently regraded (flattened out). Some of the pits remain, and collect water; some are appear to be connected to the river channel, at least when the river is high. The previous owners (Mr and Mrs Stolz) improved the site after mining, intending the land to be used for wildlife habitat, and sold to the Conservation Board at a good price to ensure this outcome.

Around the pits and swales are extensive areas of woody plants, such as Silver Maple (Acer saccharinum) and Red-Osier Dogwood (Cornus sericea). The parcel is bordered by lines of hardwoods on the south and evergreens on the north. A broad central area is mowed grass (hayfield), and interestingly a low spot collected water into a shallow temporary pond—perhaps this too could show signs of a wetland in the future. I wondered how long this standing water might last, and what organisms might use the water while it was available? And the eternal question…is THIS a wetland…? 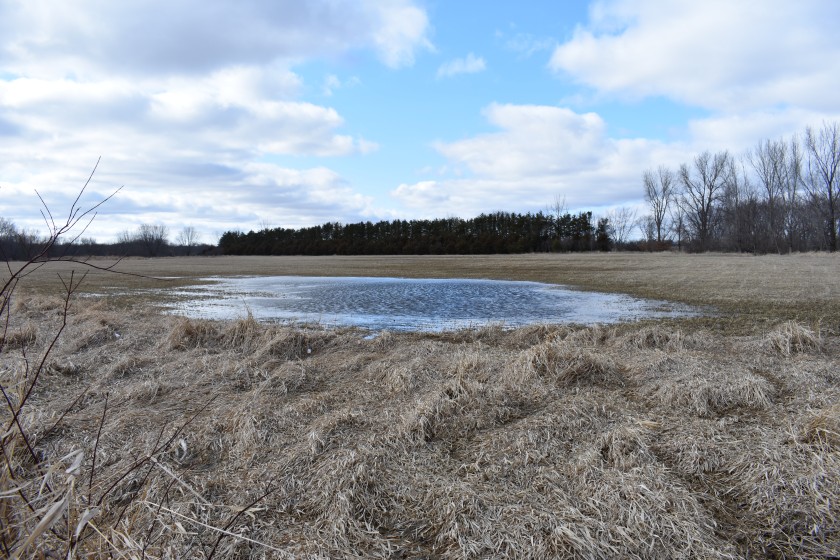 Regular readers have heard it, but I’ll say it again: permanent, standing water is not required for a site to be (legally or ecologically) a wetland. In truth, variable hydrology is the natural condition of many wetlands: wet for a few weeks in Spring perhaps, but not every year at that. “But Paul,” you say. “Where’s the ecological value in THAT?” You might think of it differently, if you consider the variety of  lifespans and habitat requirements of wetland organisms. Some algae and bacteria will “bloom” in profusion in only a few days, leaving behind food for other life, and having absorbed nutrients from the water during their growth. A few weeks might be enough for insects to complete a life cycle, and in the meantime a swarm of insect larvae in the water is a feast for birds migrating through, and the emergent adults are food for yet others. Temporary ponds are used by some amphibians, and they are known to move between ephemeral habitats. Many examples exist, because such is the nature of an amphibious life.

Indeed, “amphibious” might be a helpful way to think about wetlands. Often described as ecotones, or transitions between habitats more properly terrestrial and aquatic…perhaps we should instead think of them as amphibious, always growing and adapting to a changing set of conditions. They are land, and water, and land…and always moving, ever-shifting. Some 40 years ago, Arnold van der Valk and Craig Davis of Iowa State University published about a Gleasonian (cyclic) model of plant community change. These classic papers focus on the vegetation changes (succession), but we should realize that the animals and microbes rely on those plants  to capture the energy to power the whole ecosystem. I highly recommend reading the papers; I was sure to reference them in the latest edition of the Limnology textbook, in the new wetlands chapter. The big idea is that wetlands do not fit the classic concept of a one-directional, linear march to a “climax,” but instead circle around and around with drawdown (low water exposing mud, allowing seed germination) followed by a crowd of new vegetation, followed by plant community changes and animal grazing, and eventual open-water conditions until the next drawdown. It will work differently in each specific type of wetland, but always with the dynamic nature of a wetland at the heart of it. Across the years, and the vagaries of weather and flooding conditions, the wetland is ever-changing, yet ever-present.

And what about the Stoltz Addition? How will the land recover from the effects of mining? How will the flow regime of the river influence the hydrology of these wetlands? What practices will the managers of this site employ, and how will they shape the succession of this ecological community? Perhaps I or you, the reader, will revisit the site and let the story be told.

2 thoughts on “Ephemera and Permanence”