Visiting Little Rock River Wildlife Area in Lyon County called to mind the old country tune “The Song Remembers When” by Trisha Yearwood (Edit: not Martina McBride, as originally posted…sorry!). It’s a melancholy tale of lost love, and played in my head as I was walking on ground that surely had an ecological memory, of a wetland now gone.

This story needed to be told eventually on this blog. Upon hearing about my plan to profile a wetland in each of Iowa’s 99 counties, I was often asked “will you be able to find a wetland in every county??” Actually, my biggest concern was access: would there be a wetland on public property, or where I would be granted permission to visit? But what about the wetlands that simply aren’t there?? I knew at some point, we needed to talk about wetlands lost through human action (filling or draining the wet ground). It’s an all-too-familiar story across Iowa, where over 90% of wetland area has been lost. And my observations suggest that, although we do build wetlands, we are not finished removing them, either.

At this particular location, I found prairie and a food plot for wildlife (standing corn from last year) on the public ground. At the base of a nearby slope was a wet area, bisected by the fence marking the property line between county land and a recently-plowed farm field. This fence ran straight through what I believe was historically a wetland. On one side, we had grass, mostly matted down and silted; a layer of algae,  mostly dried and bleached white. In the farm field on the other side, we had…mud. Black, rich, well-plowed mud. Deer and bird prints dot the sticky wet surface. 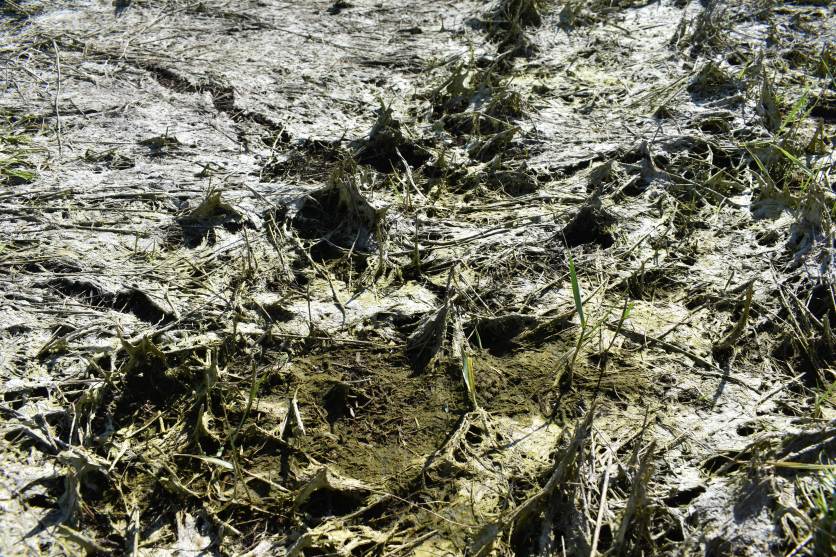 Back on the public ground, at a similar elevation, I noted a wet area bisected by tire tracks. The vehicle had obviously sank low in this other wet spot, leaving deep ruts from the tires. A few scattered wetland plants (sedges, dock, cocklebur) grew from the bare mud. In the deep tire ruts, in the open water, swam familiar amphibian larvae.

“But Paul,” you say. “How can those tadpoles/pollywogs survive when that water dries up, as it soon surely must?” Indeed, these little black tadpoles must develop quickly—and so they do! Unlike our frog tadpoles which can stay larval for years, these American Toads (Anaxyrus americanus) will grow legs, lose their tail, and leave the water in perhaps two months. 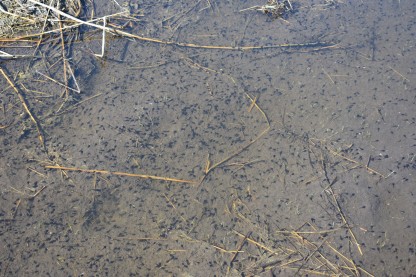 So, this might be a challenging place to live. A short-lived “emphemeral” habitat with standing water for a few weeks to (at most) months. It’s also likely that historically, the spot would flood some years and not others—we’ve discussed variable or intermittent hydrology in other posts. This naturally-variable habitat has then, at this spot, been modified by humans—thus adding new challenges to the ecosystem. We might even ask,  have we in some sense “broken” the system beyond repair, or could it somehow still function, ecologically? Despite whatever modifications we make to the habitat…the memory of wetland persists. The soil characteristics, the soggy conditions, and the biota all remember. Insects, algae, and even amphibians can successfully inhabit this place. These are memories worth preserving, and when possible, recalling and celebrating.

4 thoughts on “The Wetland Remembers When”