I was pretty excited to hear about Iowa’s only bog, noted as an important feature at Dead Man’s Lake at Pilot Knob State Park in Hancock County. Bogs are an amazing type of wetland, with interesting biota and water chemistry. The cool climate in northern Iowa, the lake formed by a glacier and situated in a sort of bowl raised above the surrounding land, and reports of a floating peat mat on the lake were all intriguing. But the big draw was an iconic bog species, the carnivorous plant Round-leaved Sundew (Drosera rotundifolia). This is the only spot in Iowa to find this “animal-eating plant,” and I wanted to see it!

So, several years ago, I took my Aquatic Ecology students from Iowa Lakeside Laboratory to the site. We braved the difficult crossing of the lake margin to get onto the floating (quaking!!) peat mat, and after a short search found the plant. I went back the following year with that class, and again we found Sundew. Then last year (2017) we saw no sign of the plant. And…what about this year??

We spent considerable time searching, but without success. The students and I had a great conversation about why we didn’t find the plant, with one possibility being that the plant was not yet out and about for the year (winter had hung on late in northern Iowa this year). We speculated about whether we would find the plant if we visited later, or whether the plant was now simply missing from the site (a disappointing development if true!).

What we did find was the bog-like peat, a buildup of dead, undecomposed plants such as Sphagnum moss accumulated over many years. (Earlier measurement of a mat 3-meters thick would take about 2,000 years to accumulate at typical rates). On the mat we found, growing out of the moss, a dense collection of sedges, cattails, ferns, and wildflowers. Scattered, stunted small trees gamely tried to grow on the unstable substrate. That peat mat not only offers no soil, and bounces like a waterbed, it is saturated with water of unusual properties. 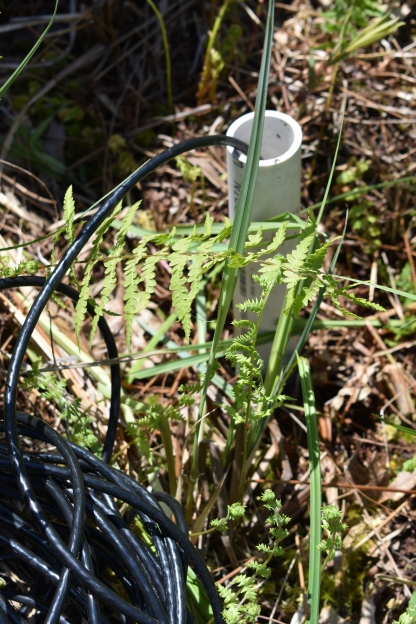 Let’s start with the color…rather like iced tea, a cloudy brown. This is typical of water in a bog, darkened by tannins leached from the peat. And despite a sunny, uncomfortably hot day, the water was also iced-tea cold: a mere 1 meter (3.3 feet) down, the water was a chilly 10 degrees Celsius (50 F). Also, as might be expected in a bog, the water was acidic: pH values ranged among the different samples but averaged 5.426. Specific conductivity (ability to conduct electricity) was 76 micro Siemens, much less than at many fens I’ve encountered.

“But Paul,” you say. “Are all these observations consistent with a fen, or a bog? How are they distinguished, anyway?” Those are more complicated questions than might be supposed at first! But really, is it any surprise that categorizing various types of wetland ecosystems might be challenging? Deciding what set of attributes define a particular biological species makes taxonomists engage in fisticuffs. Drawing a line around a wetland ecosystem is a complex process, requiring a lengthy manual and specialized training. Just the catalog of different wetland ecosystems, the widely regarded Cowardin et al (1979) publication “Classification of Wetlands and Deepwater Habitats of the United States,” is 142 pages long (!). So, yes, this is a complicated question.

Given the caveat that reasonable scientists could see things differently, I’ll say that by most definitions, this site would be called a fen, not a bog.  Both types of wetland build up peat. Both are perennially wet. Chemistry can vary over quite a range in each system, but we are more comfortably within the range of fen than bog. Surely, bogs are acidic (low pH), but fens can be acidic too. I suspect low nitrogen concentration in the water—hence the need for a plant to “eat” animals as a source of nitrogen—but this can be true in a “poor fen.”

Further study of the hydrology, in particular a water budget to estimate how much water comes from the sky as opposed to groundwater, would be helpful. I’d like more tests on the water chemistry as well. I hinted to my students that this work would make a EXCELLENT Master’s Thesis (not sure any of them will rush to do the work, but a guy can hope!). Bog or fen, this is a curious and fascinating wetland, and beautiful too. Don’t get bogged down in the details of ecosystem classification, or offended by what I choose to call it. Just call it one of our 99 wonderful Iowa wetlands, and thanks for visiting with me.

*EDIT: the “Blue Flag Iris” in the photo below is identified as Iris versicolor. That common name is also used for a related species, I. virginica. A sharp-eyed reader pointed out the similarity, and provided a link to a web page describing the two species…might have a look!

9 thoughts on “The Bog That Wasn’t”